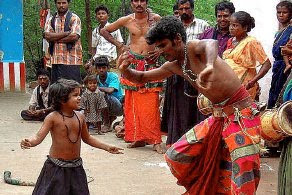 A life in penury for whip dancers

ON A TIGHT LEASH: Whip dancers performing at Sattayadi Colony of Sakkimangalam panchayat in Madurai district.

MADURAI: Society comprises two classes: those who have more food than appetite and those who have more appetite than food, goes a popular saying. Unfortunately, about 250 families residing at Sattaiyadi Colony in Sakkimangalam village panchayat near here belong to the latter.

A majority of the residents in this colony were from ‘Sholiga’ community, a Telugu speaking nomadic group of self harming whip dancers who meandered about public places seeking alms by arousing the sympathy of the people. They were accompanied by women and children playing the ‘urumi’ drums.

These nomads also conducted road shows to earn their livelihood. While dancing, they use to lash the whip on the floor to create a terrifying sound. In a ghastly act, the performers would inflict injuries on their forearms and spill the leaking blood on bare bodied children made to lie on the floor.

According to a study conducted by Foundation for Human Rights and Development (FOHRD), a non-governmental organisation here, recently not even a single parent in this colony wants their children to continue the profession. But the children cannot pursue higher education for want of community certificates.

“Many children here could not appear in the 10th standard examinations for want of community certificates. These adolescent boys and girls have become negative role models, leading to large scale school dropouts. The courageous among them are learning to use the whip,” says S. Syed Ahmed of FOHRD.

The district administration had allotted housing plots for this community in the colony in 1990 following efforts taken by their leader Ellappan, father of 14. He now wants the Government to declare them as a Scheduled Tribe. But the process is getting delayed for want of sufficient documents to prove their caste status.

The study found that joint family system was predominant among the whip dancers’ community with an average household size of 11 persons. One particular household had as many as 33 members. Only a few youngsters took up other vocations such as construction work. The rest were addicted to liquor and gambling.

Lack of access to training programmes on skilled trades and poor sanitary conditions in the colony were the other problems faced by the 250 families including a small population of ‘Bhoom Bhoom Mattukararkal’ (people who seeks alms along with a decorated bull and a drum) and fortune tellers/palm readers.

Where are your own comments on this human disinterest story?

Such pockets of people, in India, and TN, in particular, are part of this society. They carry on their traditional occupations on their own choice.

What do you want the government to do? To bracket them into Scheduled Tribes, when they themselves have not thought themselves to be, for centuries?

Government has given them pattas, as the news item say. Has it given to others? And, are you sure others don't deserve such help?

What is your opinion: to make them all white collar workers?

Pl open your mouth and say something. Then, I will continue where you let off.