Christoph Markschies suggests that we have lost 85% of Christian literature from the first two centuries–and that includes only the literature we know about. Surely there must be even more, for the discovery of texts like the Gospel of Mary came as a complete surprise. We have to be careful that we don't suppose it is possible to reconstruct the whole of early Christian history and practice out of the few surviving texts that remain. Our picture will always be partial—not only because so much is lost, but because early Christian practices were so little tied to durable writing.

The Gospel of Mary  is found in the Berlin Gnostic Codex (Papyrus Berolinensis 8502). This very important and well-preserved codex was discovered in the late-nineteenth century somewhere near Akhmim in upper Egypt. It was purchased in Cairo in 1896 by a German scholar, Dr. Carl Reinhardt, and then taken to Berlin.

The codex (as these ancient books are called) was probably copied and bound in the late fourth or early fifth century. It contains Coptic translations of three very important early Christian Gnostic texts:  the Gospel of Mary, the Apocryphon of John, and the Sophia of Jesus Christ. The texts themselves date to the second century and were originally authored in Greek.

But more importantly, the codex preserves the most complete surviving fragment of the Gospel of Mary – and it is clear this named Mary is the person we call Mary of Magdala. Two other small fragments of the Gospel of Mary from separate Greek editions were later unearthed in archaeological excavations at Oxyrhynchus, Egypt. …..Finding three fragments of a text of this antiquity is extremely unusual, and it is thus evidenced that the Gospel of Mary  was well distributed in early Christian times and existed in both an original Greek and a Coptic language translation.

Unfortunately the surviving manuscript of the Gospel of Mary is missing pages 1 to 6 and pages 11 to 14 – pages that included sections of the text up to chapter 4, and portions of chapter 5 to 8.  The extant text of the Gospel of Mary, as found in the Berlin Gnostic Codex, is presented below. The manuscript text begins on page 7, in the middle of a passage.

The Gospel of Mary of Magdala:
Jesus and the First Woman Apostle

We do know that the fifth-century manuscript in which it was inscribed was purchased in Cairo by Carl Reinhardt and brought to Berlin in 1896. Two additional fragments in Greek have come to light in the twentieth century. Yet still no complete copy of the Gospel of Mary is known. Fewer than eight pages of the ancient papyrus text survive, which means that about half of the Gospel of Mary is lost to us, perhaps forever.

Yet these scant pages provide an intriguing glimpse into a kind of Christianity lost for almost fifteen hundred years.

it exposes the erroneous view that Mary of Magdala was a prostitute for what it is-a piece of theological fiction.

The story of the Gospel of Mary is a simple one. Since the first six pages are lost, the gospel opens in the middle of a scene portraying a discussion between the Savior and his disciples set after the resurrection. The Savior is answering their questions about the end of the material world and the nature of sin. He teaches them that at present all things, whether material or spiritual, are interwoven with each other. In the end, that will not be so. Each nature will return to its own root, its own original state and destiny.

The Savior concludes this teaching with a warning against those who would delude the disciples into following some heroic leader or a set of rules and laws. Instead they are to seek the child of true Humanity within themselves and gain inward peace. After commissioning them to go forth and preach the gospel, the Savior departs.

But the disciples do not go out joyfully to preach the gospel; instead controversy erupts. All the disciples except Mary have failed to comprehend the Savior's teaching. Rather than seek peace within, they are distraught, frightened that if they follow his commission to preach the gospel, they might share his agonizing fate. Mary steps in and comforts them and, at Peter's, relates teaching unknown to them that she had received from the Savior in a vision. The Savior had explained to her the nature of prophecy and the rise of the soul to its final rest, describing how to win the battle against the wicked, illegitimate powers that seek to keep the soul entrapped in the world and ignorant of its true spiritual nature.

But as she finishes her account, two of the disciples quite unexpectedly challenge her. Andrew objects that her teaching is strange and he refuses to believe that it came from the Savior. Peter goes fur­ther, denying that Jesus would ever have given this kind of advanced teaching to a woman, or that Jesus could possibly have preferred her to them. Apparently when he asked her to speak, Peter had not expected such elevated teaching, and now he questions her character, implying that she has lied about having received special teaching in order to increase her stature among the disciples. Severely taken aback, Mary begins to cry at Peter's accusation. Levi comes quickly to her defense, pointing out to Peter that he is a notorious hothead and now he is treating Mary as though she were the enemy. We should be ashamed of ourselves, he admonishes them all; instead of arguing among ourselves, we should go out and preach the gospel as the Savior commanded us.

Disciples were offended by Jesus' apparent preference of a woman over them.

In many respects incidents and personalities are the same as found in other gospels. Yet it is also clear that the story of the Gospel of Mary differs in significant respects.  For example, after Jesus commissions the disciples they do not go out joyfully to preach the gospel, as they do in Matthew; instead they weep, fearing for their lives. Some of the teachings also seem shocking coming from Jesus, especially his assertion that there is no such thing as sin. Modern read­ers may well find themselves sympathizing with Andrew's assessment that "these teachings are strange ideas."

It is important to remember, too, that these first Christians had no New Testament, no Nicene Creed or Apostles Creed, no commonly established church order or chain of authority, no church buildings, and indeed no single understanding of Jesus. All of the elements we might consider to be essential to define Christianity did not yet exist. Far from being starting points, the Nicene creed and the New Testament were the end products of these debates and disputes; they represent the distillation of experience and experimentation—and not a small amount of strife and struggle.

All early Christian literature bears traces of these controversies. … whether the resurrection was physical or spiritual were stimulating theological conversations and causing rifts within and among Christian groups.

History, as we know, is written by the winners.

Much of the Gospel of Philip is dedicated to a discussion of marriage as a sacred mystery, and two passages directly refer to Mary Magdalene and her close relationship with Jesus:

There were three who always walked with the Lord: Mary, his mother, and her sister, and Magdalene, the one who was called his companion. His sister and his mother and his companion were each a Mary.   In different places in the Gospel of Philip, Mary Magdalene is called Jesus's companion, partner or consort, using Coptic variants of the word koinônos (κοινωνός), of Greek origin, or the word hôtre, of Egyptian origin.

In the Bible, koinônos is sometimes used to refer to a spouse (Malachi 2:14; cf. 3 Maccabees 4:6), but is also used to refer to a "companion" in faith (Philemon 17), a co-worker in proclaiming the Gospel (2 Corinthians 8:23), or a business associate

The other passage, purportedly referring to Jesus kissing Mary Magdalene, is incomplete because of damage to the original manuscript. Several words are missing.

Most notably there is a hole in the manuscript after the phrase "and used to kiss her [often] on her...." But the passage appears to describe Jesus kissing Magdalene.

As for Wisdom who is called "the barren", she is the mother [of the] angels. And the companion of the [...] Mary Magdalene. [... loved] her more than [all] the disciples [and used to] kiss her [often] on her [...]. The rest of [the disciples...] They said to him, "Why do you love her more than all of us?" The Savior answered and said to them, "Why do I not love you like her? When a blind man and one who sees are both together in the darkness, they are no different from one another. When the light comes, then he who sees will see the light, and he who is blind will remain in darkness.

The Gospel of Philip is the document responsible for popularizing the idea of a marriage between Jesus and Mary Magdalene.

Dan Brown's Da Vinci Code is not completely an imaginative story. Probably it springs from the verses we find in gospel of Philip, " In different places in the Gospel of Philip, Mary Magdalene is called Jesus's companion, partner or consort" and " And the companion of the [...] Mary Magdalene. [... loved] her more than [all] the disciples [and used to] kiss her [often] on her [...]".

There is one another view about the 'hidden life' of Jesus. In those days, any young man remaining a bachelor till the age of 30 was very rare and unusual. These could have made the author to fabricate a story where Mary of Magdala becomes the loving wife of Jesus. Further, Peter and his fellow disciples showed great envy and jealousy with Mary. These could have been the point of germination for Brown's story. Of course Gnostic Gospels of Elaine Pagel and The Holy Blood and the Holy Grail of Michael Baigent, Richard Leigh and Henry Lincoln should have given the supporting materials for Brown's novel -  for the latter it was a five-year "labour of love" in researching their book. The Holy Blood And The Holy Grail, itself a bestseller at the time, purports to be a factual history theorising that Jesus and Mary Magdalene married and had a child, and that the bloodline continues to this day, with a secret society protecting their heirs against the Catholic church. The same theme is there in Brown's novel which became a best seller - 40m copies worldwide - and also earned money for the film with the same title. Brown had to face a case of plagiarism since he used the research materials of co-authors of The Holy Blood and the Holy Grail. 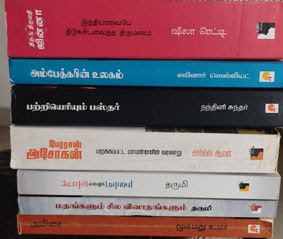