The former university vice-chancellor had been given police protection after Hindu hardliners protested against his comments. Some of these groups actually celebrated the professor's killing on social media yesterday.

Many believe Dr Kalburgi made many enemies within his own Lingayat community - an influential Hindu sect that dominates life and politics in Karnataka - with his outspoken remarks about its traditional beliefs and practices. 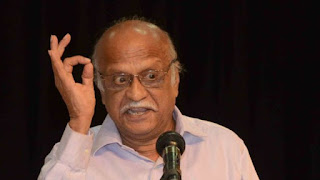 Dr Kalburgi's killing comes two years after the murder of another prominent rationalist-thinker, Dr Narendra Dabholkar, in the western city of Pune. His killers have still not been caught.

He waged a long battle against superstition. He was the communist who also engaged with the caste question.

The first question that came to mind when I heard of Pansare’s demise was who might have killed him, and why such a saintly person would have been targeted.

All through his life, Pansare had rubbed the conservative sections, the Hindutva forces in particular, the wrong way.

....he had opposed the glorification of Nathuram Godse


Anti-superstition activist and Maharashtra’s most vocal rationalist Dr. Narendra Dabholkar (65) was shot dead by two youth on a motorcycle on the Omkareshwar bridge near Pune.


An all-party bandh has been called in Pune on Wednesday in protest against the killing.

The police said it was a planned murder.